The Critical Asset Management System (CAMS) is an open-source tool that allows towns, cities, and states to inventory their critical assets, locate them on a map and show the dependencies that assets may have on one another.  In this way, the risk of cascading failures between assets in the event of a disaster can be identified, planned for, and, as funds permit, mitigated. An example of a cascading failure might be where a communication tower is damaged by a flood or hurricane which in turn affects an electrical generating plant, and by turns thereafter the local air or seaport, and the operation of a local hospital dependent on the port for medical supplies.

By showing in one place how critical assets from multiple systems affect each other, and who owns and can act on those assets, CAMS is intended to encourage collaboration and data sharing between asset owners, thus improving preparation for, mitigation of, and recovery from, disasters.

For an example of how CAMS might be used, consider a town or region in a hurricane or typhoon zone. Prior to hurricane season, the town or region is preparing for various scenarios that might occur if a hurricane strikes. Using CAMS, critical asset owners in the town can create, view, and share data relating to “their” assets like power plants, hospitals, emergency equipment, communications systems, water/sanitation, and so on, and the dependencies between them.  In this way, all parties can determine how the failure of one asset might affect other assets downstream. This plays out in at least three ways:

CAMS is designed to be simple to set up and use on either a computer or a smartphone.  Given the nature of the data that CAMS may hold, it has significant role-based security protections built into it, as described below, and is operated to SOC2 standards.

CAMS has been produced by volunteers from ARISE-US, Terminus DB, BGC Engineering Inc, Verses.io, and Datacequia LLC.  It is currently at Version 1.0 – the very basic, minimum viable system.  If you have any comments on how we can improve the tool, please add them here. We are endeavoring to build a community of more volunteers who will add to CAMS over time and, if accepted,  we will ensure that your suggestions are included in the next generation of the work program.

What does CAMS Mean for You?

You’re likely using CAMS because you and/or your agency or organization have a role in developing, implementing, and improving CAMS. Authorities or government officials in your country and/or community have evaluated and elected to use CAMS as key input for their development, disaster risk management (DRM), and/or resilience needs.  CAMS relies on the country’s and/or community’s agencies and asset owners for the information/data that drives the CAM System.  Therefore you, and/or those in your agency or organization may be needed to add and maintain your assets, and/or check that your assets and their relationships and dependencies have been properly mapped across CAMS, as well as become important users of CAMS during all phases of development planning and DRM.

It is important to understand that CAMS is NOT a disaster management system.  It is a tool to help users prepare for disasters and recover from them, but it is not intended to manage emergency response as the event is happening. Neither is CAMS a business continuity system such as a private enterprise might use. 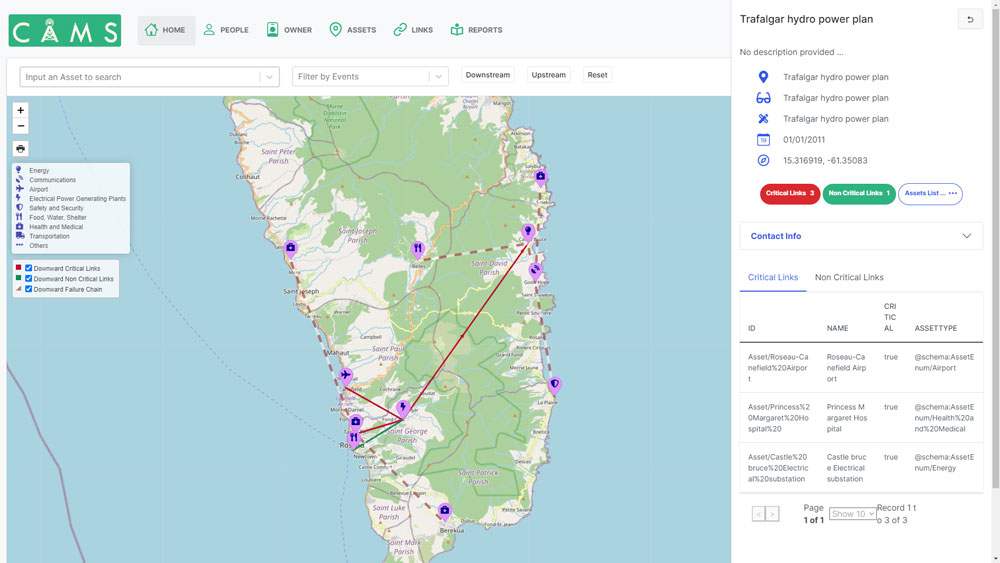 If you’re interested in contributing to CAMS to help those severely impacted by climate change, you can visit the GitHub repository for more information.

Go to the CAMS project repos:

Read more about the project: